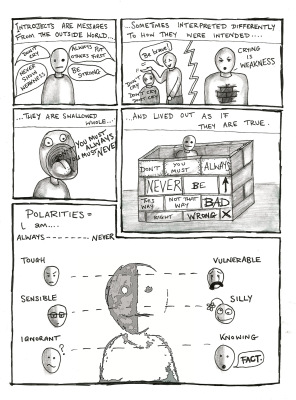 Shoulds: the internalised wants of other people

One of the arch-villains of gestalt therapy is the word “should”.

If you’re in therapy with a gestalt therapist, and you start talking about things you should be doing, chances are your therapist’s self-talk has started going, “holy shit! Introjection at twelve o’clock! Kill it! KILL IT WITH FIRE!”. This is because “should” is treated as a dog-whistle term for introjection, and if gestalt had a Wanted: Dead or Very Dead list, introjects would be towards the top.

Introjection is a hang-over from gestalt’s psychoanalytic heritage that hasn’t quite been deconstructed satisfactorily. Which is ironic, really, considering that that’s what introjection is all about. Essentially, introjection is the uncritical internalisation (metaphorically, swallowing whole) of the thoughts, opinions, rules etc of other people. Two main types of introjection can be identified: force-feeding (ie, I introject your rules because you force them down my throat), and inferences (ie, no one says anything directly, but I develop the impression that such and such is the case). The key factor is that I do not apply critical thought to (metaphorically, I don’t chew) what I take in. 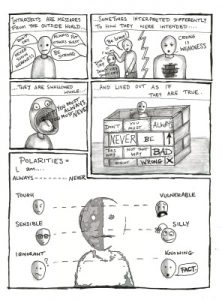 A key force in gestalt therapy is semantics. The words you and I use to communicate don’t just contain valuable information about the kind of people we are, they also shape the very experiences we are attempting to communicate. In day to day therapy, this translates into drawing someone’s attention to the words they are speaking. This then raises that person’s awareness of how they are creating their experience in the moment.

I find it instructive to replace “I should” with “x wants me to”. The word should is most usually used to invoke an external authority. What Gary Yontef calls shouldistic-regulation (ie, regulating oneself according to external authority) stands in direct opposition to organismic self-regulation (ie, regulating oneself according to organismic need). When someone says, “I should do better”, they nearly always mean, “x wants me to do better”, where x is a significant internalised other. Shouldistic-regulation is striving to do better because I should. Organismic self-regulation is striving to do better because that’s what I need to do at this time.

The same applies to societal norms and moral codes. “I should not steal”, is really, “x wants me to not steal”. This is obviously the case with regards to force-fed introjects; someone has to do the force-feeding. This is less obviously the case with inferences because, at first glance, no one is doing any force-feeding. The modification I would make in this case is, “I imagine x wants me to”. That is, the inference I am making derives from either the kind of social atmosphere I am experiencing, or the extension of pre-existing rules.

Social atmospheres “give me the impression” that such and such is and isn’t acceptable. But social atmospheres emerge out of the interactions of actual people, allowing me to identify who it is that I am imagining wants me to x. Pre-existing rules give me a way of anticipating what possible rules might apply to a new area of activity. As pre-existing rules are put in place by actual people, I am again able to identify who it is I am imagining wants me to x.

The therapeutic objective in this odd little game is grounding social constructs in actual people. Moral codes do not spontaneously come into being of their own accord; they are created and maintained by people. The kinds of introjects that become the focus of significant therapeutic effort generally need to be traced back to their origin. And that origin is frequently “my dad”, or “my mum”, or “God”.

A hugely important part of therapy is deconstructing the introjected rules by which a person is constrained. That process will invoke resistance from the internalised originator of those rules. And frankly, if I’m going to be up against someone’s internalisation of God, I’d rather know about it!